This manual is designed to be a layman's introduction to Magic Lantern release No. 0.1.6. Technical information regarding this release as well as the history and development of Magic Lantern can be can be reviewed the Magic Lantern wiki.

Magic Lantern is a program that has been developed by Canon 5D Mark II users to provide video and still enhancements to the operating system in the camera. It loads from the CF card on board the camera and does not modify the camera's factory firmware in anyway. Magic Lantern is modeled on CHDK, a system developed in the open source community that provided enhancements to Canon Power Shot compact digital cameras.

Bear in mind that this Magic Lantern release comes with no warranty for any use; you use it at your own risk. This project is attempting to improve uses of the product for professional level uses and is intended for that purpose. Developers and Users contend that using the Magic Lantern does not harm your camera since it is loaded into the memory only temporarily and if you turn off the camera, it's gone completely. Alpha testers have used Magic Lantern for several versions now, and there have been no reported camera issues developed in using the software. The original camera firmware is left untouched in the camera. There have been two prior released versions as the software and the developers have had no report of any damage arising out of its use.

Canon support maintains that any upgrades to the software of the camera not performed by an authorized Canon Repair Facility or installed as directed by Canon, would void the warranty. Thus you should consider it likely that damage occuring to your camera while using Magic Lantern software would not be covered under your Warranty, should Canon challenge the Warranty on that basis. Whether or not their position would hold up legally, has not been tested.

However, the open source developers of this software are essentially accessing settings that are available on board the camera as part of the Canon design, and it is unclear how such usage would be determined in a repair situation in any event.

What does Magic Lantern Do: A General Description of Process[]

Simply stated Magic Lantern 0.1.6 provides a system that allows the user to obtain access to various settings on the camera, some of which are not available in the Canon 5D Mark II firmware release 1.1.0. This most recent factory release provided some additional manual setting capabilities for video shooting, but left many needs unfulfilled. Magic Lantern 0.1.6 only works with firmware version 1.1.0.

In both cases, the process is started by starting the camera in the standard configuration. That means you start your Canon 5D Mark II as usual, using firmware version 1.10.

After Magic Lantern is running, the user will:

Note: After all uses developers are recommending that users also open, and remove the battery briefly, to assure memory is cleared, before restarting of the camera in normal modes. This recommendation also prevents a potential that some process might continue to be running in the camera causing it to drain the battery or overheat the camera even after shut down.

Any compact flash card that you intend to shoot with Magic Lantern, will have to have magic lantern installed to it. Remember, the card supplies the additional operating instructions for the firmware running on the camera.

About choice of cards: Generally, most cards that can be used with the Canon 5D Mark II in regular mode, will work with Magic Lantern. However, the user should be prepared to consider changing cards should continuous trouble be noted with a particular card or brand of cards.

Installing Magic Lantern on your card:

Your CF card directory should look like the following as a result of the transfer: 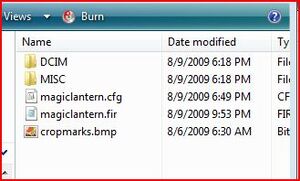 Repeat these steps each compact flash card you want to use for recording with Magic Lantern.

The Magic Firmware program will then load: 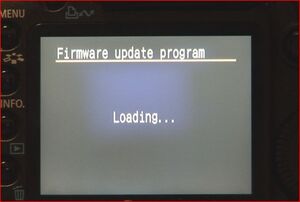 The screen will go blank, and then show this screen: 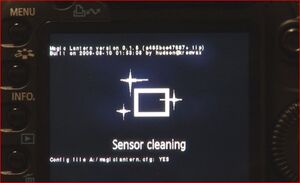 It will then go blank again. If it does not come up after a few seconds, push the Live View button.

(Note: Some users report that turning off automated sensor cleaning will elimnate the need to turn Live View back on after loading Magic Lantern 0.1.6.)

Magic Lanterns screen will look something like this now: 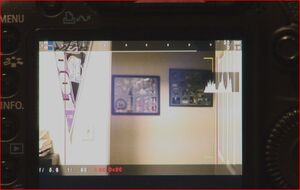 At this point you can just press the Set button to record, especially if you had your camera set-up pre-configured in the configuration file. In the next chapters you will learn how to configure various setting, for that purpose.

The sole purpose of Magic Lantern is to enhance use of the Canon 5D MKII, by allowing the user to adjust certain camera settings that are normally not accessable in the stock Canon firmware. There are five menus in Magic Lantern Version 0.1.6. They are Audio, Video, Bracket, Focus, and Debug.

Magic Lantern takes over the Picture Style button on your Canon 5D Mark II and uses it to access the Magic Lantern menu system. Press that button to enter the system. You will see the default Audio screen at start up: 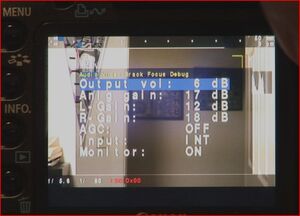 You will toggle to each menu or up and down the menu selections with the four way mini-joy stick. Depressing the joy stick will select changes for the item. The Set button can also be used to select.

Zebras
This setting toggles Zebras on and off.

Zebra Thrs
This setting toggles through various level of zebras. As of this writing actual values have not been analyzed. The authors believe 0xf000 approximates 100%.
Cropmarks
This setting toggles cropmarks on or off. The Magic Lantern will access a cropmark file in the root directory to write user developed crop marks. There is a sample version provided. The camera can only access a simple 8 bit bitmap file and should be designed within the parameters of the demonstration file provided. There are more sample cropmark files available with different aspect ratios. Under the current version, the replacement file must also be named cropmarks.bmp and be stored in the root directory of the CF card.
Edgedetect
This function currently is still in development an in current implemention does not provide usable edge detection for focusing purposes.
Histogram
Toggles a histogram display.

This feature is provided for still photography purposes to test several different exposure level of a scene.

The focus menu system is designed to take advantage of autofocus lenses to provide an automated rack focus for motion filming, and stack focusing for still photography. It is currently in Beta status, and is provided for user testing and development.

Settings are as follows:

Focus A
This is end point of rack focus. To set, focus the lens, then press "Set".

Rack speed
Sets the focus speed. Select a speed and test and reset as needed.

Rack Focus
Triggers the rack focus operation that moves between the start and end focus points. After the move is complete pressing again reverses the move.

Run Stack Focus
This selection will shoot a series of photographs with varying focal distances. Used in macro photography to assemble sharper final images by merging photos where each has a different focus point.

The following are display only:

Focal Dist
The distance to the focal point. Value is returned by most newer Canon lenses. If the lens does not report any distance information, 0 will be displayed and the DOF calculations will not be correct.

Hyperfocal
The hyperfocal distance is the point of focus where everything from half that distance to infinity falls within the depth of field. This is the largest depth of field possible for the current f-number.

DOF Near
The nearest distance in which objects appear in focus.

DOF Far
The farthest distance in which objects appear in focus.

Now that you know what the buttons are about, here is how you make it work:

1. After opening the focus menu, pick the end point of your rack focus, focusing manually with your lens on that point.

3. Next, scroll down to Focus A. You need to zero this setting out, before going on. Press "Set" to zero it out.

4. Once that is completed you will use the Zoom + button in the very right hand upper corner of the back of the camera to move the focus point to your start point. You will need to watch the screen closely to make sure you reach the proper point.

5. Next select the time period of the pull, by scrolling down to rack speed. The lower the number, the longer the rack will take. It is recommended for testing purposes to start around 20.

6. Once that is done, you need to exit the Magic Lantern Menu, to start the camera recording

7. Once the camera is recording, re-enter the Magic Lantern Focus Menu, and scroll to Rack Focus. To start the rack focus, press "Set". You should see the rack focus commence and complete its cycle. 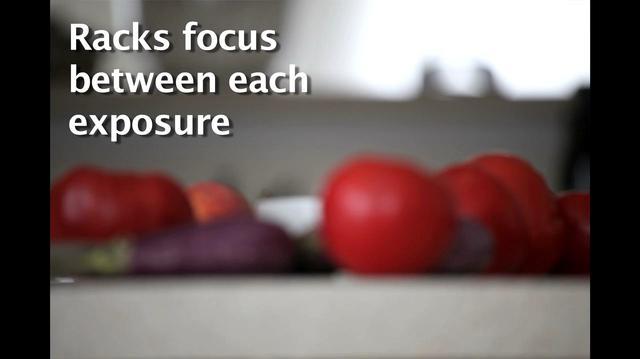 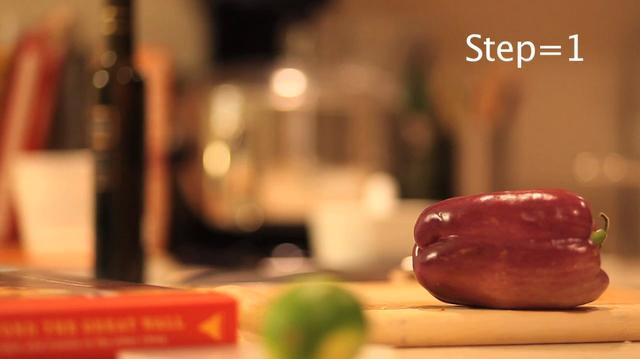 The menu provides various commands designed to help the developers determine what is happening during processes. The general user may be asked to provide information about bug reports from these menus.

However, it is expected that the general user will use the Save Config command to develop her own configuration settings for repeatable use. That process is explained more below.

The basic configuration file on board at first start:

Many of the settings in the initial configuration file are on off or level settings for various basic features of the camera that are enhanced or brought up by Magic Lantern. 0 will generally mean no, and 1 will mean turn it on. So a zebra.draw=1 at Zebras will turn zebras on and so on.

The user can edit this file in a text editor, making setting changes. As shown, the initial file contains instructions for setting the configuration settings.

Magic Lantern produces additional on screen information, not available on the stock firmare: 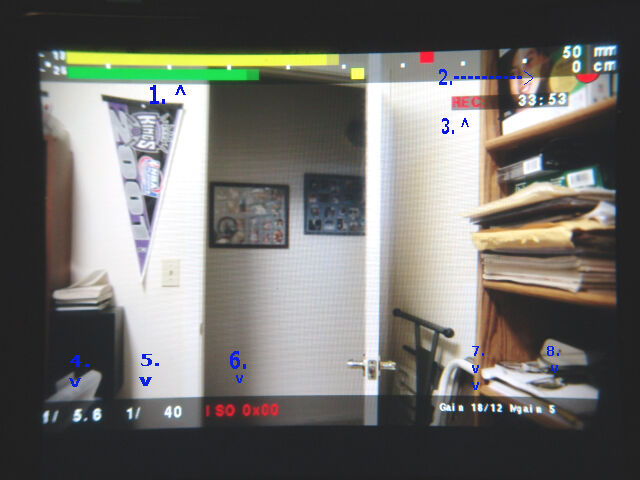 3. Recording indicator. Displays an estimate of minutes:seconds left on card during recording process.

7. Digital gain settings (only displayed for a second while recording)

8. Analog Gain Setting (only displayed for a second while recording)

Alpha users have reported occasional blank screens after invoking playback on their Canon 5D Mark II, while in Magic Lantern 0.1.6. If this occurs, try pushing various left side buttons. In particular, pushing the Info, Playback, Picture Style or Menu buttons several times, may resolve this.

If the blank screen is not resolved after such attempts, users should immediately shut down the camera, and remove the battery briefly and then restart the camera.

Community content is available under CC-BY-SA unless otherwise noted.
Advertisement